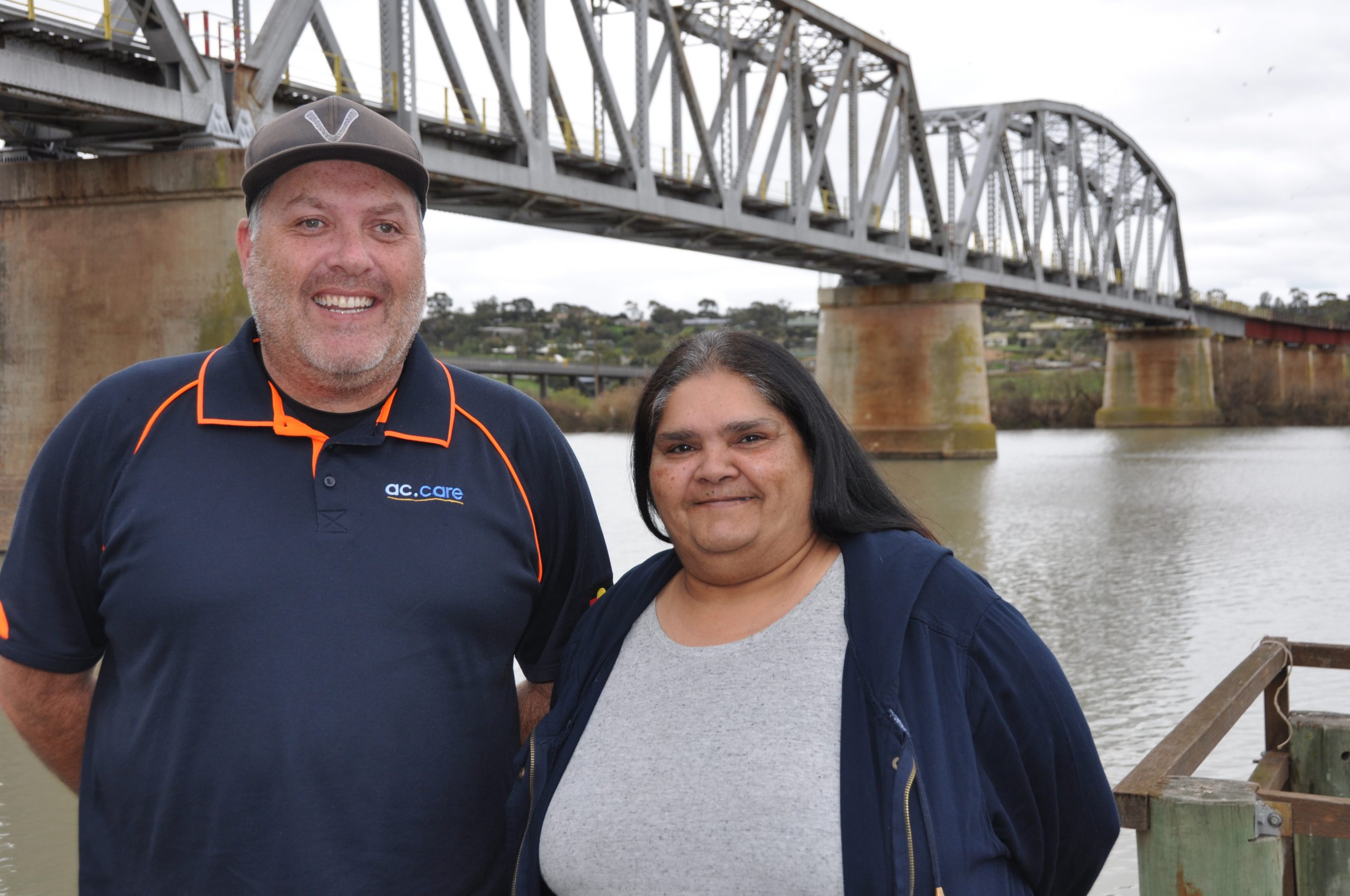 ENCOURAGING fellow Aboriginal people to lead and take ownership of social services in their communities is a passion of Ngarrindjeri man Robin Wright. His promotion to become ac.care’s Aboriginal services senior program manager was among significant appointments in 2019 as the agency continues recruitment and support for Aboriginal employees, including in leadership positions. Kathy Rigney was also appointed during the year as the agency’s senior Aboriginal advisor. Ms Rigney is an Aboriginal descendant of the Ngarrindjeri and Boandik (Bunganditj) language groups of the Murraylands and Limestone Coast regions. She is a familiar face to many households in the Murraylands after having spent 28 years working in the child protection sector, including as a principal Aboriginal consultant and in Aboriginal community capacity building with the Department for Child Protection. “After seeing the numbers of Aboriginal kids coming into care, I wanted to play a bigger part in strengthening and empowering families, walking side by side with people and giving them the tools that they need to improve their current situation,” she said. “Whatever issue they are facing at the time, if you can deal with that and empower them with services, they can understand what they need to do, even if you have to guide them, but it’s not a matter of doing it for them – they’ve got to do it for themselves and you just support them and as they gain knowledge and skills, they can share that with their family connections and friends.” Ms Rigney has many years of experience in not only child protection, but also youth work. She is passionate about sharing her knowledge and experience with the ac.care team and has already proven a strong advocate for children in care. Ms Rigney is working on a range of projects alongside the foster care team, contributing to enhancing culturally responsive and safe care for Aboriginal children. “I value the work that foster carers do,” Ms Rigney said. “They open up their homes and their families to take in other children, helping to make them feel that they belong.” Meanwhile, Mr Wright’s role involves leading staff in the Murraylands and Riverland to make a difference in the lives of vulnerable people.

Rob started with ac.care in the Commonwealth-funded Home Interaction Program for Parents and Youngsters, known affectionately as HIPPY, after a career change, helping deliver the service in the Riverland. He moved from the early learning and parenting initiative to the Opening Doors Aboriginal youth program before progressing to leading ac.care’s Riverland Aboriginal services team and then took on the agency-wide role. Rob said he continued to witness first-hand the hardships faced by Aboriginal people, but that he remained optimistic, partly by focusing on the positive impact of notfor-profit organisations. “Programs like Opening Doors have been really successful and don’t force anyone to do anything, but gently guide the guys to opportunities,” he said. “Some of these youths face real barriers doing things many of us take for granted, like attending school and getting a job or your driver’s licence, especially with the requirement to complete driving hours.” He said the programs worked because of the focus on engaging the community to lead development of services. “It’s about creating ownership with the young people leading the stuff themselves to the point where we have a client that became a volunteer with us and went on to lead some of the dance stuff with the youth group out at the mission,” Rob said. “Stuff like that is just a really big step when you look at where people have come from in their lives to what they have gone on to achieve.” Rob has since progressed to a human resources role within ac.care.

ABOVE: LEADERSHIP-  Robin Wright was promoted to our Aboriginal services senior program manager in 2019/20, before progressing to an ac.care human resources role later in 2020, while Kathy Rigney was recruited as the agency’s senior Aboriginal advisor.